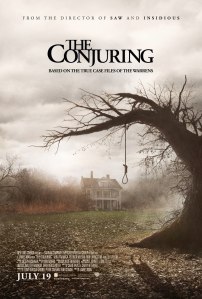 Plot: The Perron family move into their new home and begin experiencing disturbing phenomena. They seek help from renowned paranormal investigators  Ed (Wilson) and Lorraine (Farmiga) who uncover more than they bargained for…

Paranormal investigators Ed and Lorraine Warren have become synonymous with some of the most notorious and deeply disturbing occurences in history. The most famous Warren investigation is the maligned yet chilling case of the Lutz family in 1975, the family claim to have been driven from their suburban home in Long Island due to an insurgent demonic possession.The tale is now known as the ‘Amityville Horror‘ (now subject of several film adaptations). Werewolves, demon murder trials; the Warren’s built their careers on investigating such supernatural phenomena, often following up each case with an exclusive and undoubtedly lucrative book. The Conjuring charts the couple’s deeply unsettling investigation into the Perron family’s predicament in 1971.

The Conjuring is an atmospheric genre piece which harks back to a bygone era, a truly haunting vision reminiscent of classic horror films such as the Poltergeist (1982) and The Haunting (1963) rather than the recent wave of gore-laden mainstream horror infestations. This is slow burning, nerve jangling cinema which is discomforting in its sustained terror. Despite offering little originality, Wan executes classic scare tactics with mastery and precision which has been lost through the ages. Some may argue that The Conjuring doesn’t go beyond the traditional horror plot devices. The creaking doors, the monster under the bed and even a Hitchcockian nod to the suicidal birds are blended seamlessly together in a nostalgic composite. Horror fanatics and those well versed in the classics will experience a burning sensation of deja vu whereas mainstream audiences are sure to be shaken by Wan’s creepy theatrics.

The devil is in the detail and often lack of it, scenes iteratively build in suspense and dread whilst tension simmers beneath the surface. Even when the story begins stretching itself into occult territory in its latter stages, it feels a natural progression. An intended crescendo and culmination of the frightening episodes which precede it rather than a far fetched effort to shock. Look out for the intensely creepy basement clap scene which is an apt demonstration of Wan finding his finest form. The compassionate scenes between the Perron’s and Warren couple are heartwarming and serve to ensure the human element remains at the forefront. Strong turns from the dependable Vera Farmiga, Wan’s favourite Patrick Wilson and maternal protector Lili Taylor serve to heighten tension and project figures whom the audience care for.

The Conjuring’s box office performance has made the headlines. A low budget picture reaping great rewards and even attaining No.1 box office status in the UK. It has, commercially, dwarfed all horror features in recent memory (including Evil Dead, The Purge, Mama and Dark Skies). Much has been made of the horror genre being a ‘bankable’ genre but it is crucial not to overlook the steep task of crafting visceral, experiential horror which captivates audiences and genuinely frightens them. James Wan has established himself as one of the leading horror film-makers plying his trade in modern day cinema. Having written and directed the ground-breaking ‘Saw’, the much overlooked ‘Dead Silence’ and the superb ‘Insidious’. The Conjuring ranks right up there as one of his best.