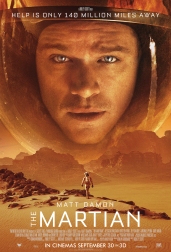 On our last fateful encounter with Matt Damon, he was in cryonic preservation awaiting rescue on a distant planet in Christopher Nolan’s operatic space odyssey, Interstellar. Call it blind luck or prophetic destiny, the American is now inadvertently left behind on NASA’s Ares III mission to Mars in Ridley Scott’s adaptation of Andy Weir’s bestselling novel: The Martian. It’s crazy to think Weir’s novel began as a serialised self-published labor of love on his very own blog back in 2011. Rapturous digital applause led to The Martian being formally published and re-incarnated to live a new lease of life on the silver screen. It’s an altogether tamer beast than the likes of Interstellar and Gravity; The Martian is a swashbuckling cosmic adventure that journeys through a spectrum of emotion with a beaming smile on its face. The uber-talented Drew Goddard’s witty script ensures The Martian effortlessly strolls around the red planet with gusto and a sense of humour even when things turn sour.

The Martian pushes human endeavor to the extreme. It’s a remarkable meditation on the power of the human spirit,

deep rooted courage and resourcefulness. Mark Watney (Damon) is believed dead, badly injured with limited supplies of food or any meaningful chance of rescue. When all hope is lost, Watney buckles down and dares to dream of survival. The challenge becomes an equation, a mammoth multi-layered enigma that needs to be broken down one step at a time. Using his botany skills, he is able to conjure up a miraculous formula to produce food on an arid planet. The hero’s positive mindset is his primary ally. It’s inspirational stuff that is expertly directed by Scott in a blissfully colloquial tone that makes it eminently watchable.

Avoiding the traps of boredom, Scott interchanges Watney’s struggle with two other worlds: life at Nasa’s HQ on Earth ((brilliantly led by Chiwetel Ejiofor) and Watney’s crew ship hurtling away from Mars. At Nasa, the discovery that Watney is still alive prompts a frantic rescue operation and the moral dilemma on whether to share the news with members of his crew aboard the Hermes ship. There’s a tantalising ebb and flow where rescue seems out of the equation until a prospective idea emerges from the most unlikeliest of places. Commander Lewis’ (Chastain) faces the burden of guilt of leaving her colleague behind, it pervades her sound judgment. The emotional heart interfering with the rational mind is a common theme seeded throughout the narrative. Watney is able to detach himself from feelings of hopelessness to think logically, it’s a rare skill to come by that needs to be honed in times of stress. The Martian does require one to suspend disbelief at times, it pushes boundaries and drinks the lifeblood of science fiction.

It’s great to see Ridley Scott returning to his sci-fi roots after the disappointment of The Counsellor and Exodus: Gods and Kings, it’s his best film in years and harks back to the nostalgic dimensions of the Alien universe and Blade Runner. The Martian is a grand tale of self-discovery and a signpost for the genre. A must see.

To leave you with a romantic and optimistic view of humanity:

‘Every human being has a basic instinct: to help each other out. If a hiker gets lost in the mountains, people will coordinate a search. If a train crashes, people will line up to give blood. If an earthquake levels a city, people all over the world will send emergency supplies. This is so fundamentally human that it’s found in every culture without exception. Yes, there are assholes who just don’t care, but they’re massively outnumbered by the people who do. ~ Mark Watney, The Martian