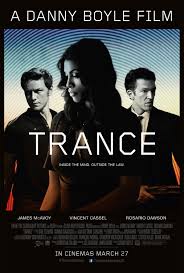 Plot: During a heist to steal a valuable painting, Simon (McAvoy) is assaulted by Franck (Cassel) and suffers from amnesia. The location of the painting remains unknown. Hypnotherapist (Dawson) is contacted to solve the mystery and locate the masterpiece.

Fresh from bathing in much deserved Olympic eminence, the mercurial Danny Boyle returns with mind boggling psycho-drama Trance. One must applaud Boyle’s willingness to tackle a myriad of genres and themes in his career, to his credit his diverse back catalogue can overwhelmingly satisfy virtually any demographic. Whether adapting ‘Frankenstein’ at the National Theatre in London or delving into the depths of the criminal underworld in India with ‘Slumdog Millionaire’, Boyle has produced works of art of the highest calibre.

Although Trance has divided critics there is no questioning its visceral and immersive nature. Trance is a multi-faceted enigma of truly ostensible ambition, a puzzle which the viewer is compelled to solve and piece together. The painting heist is simply the vehicle used to dive into the subconscious of the three leads of the film (Dawson, McAvoy and Cassel). The fragility of the mind and the entire concept of memory are explored in a series of trance like hypnotherapy sessions which truthfully raise more questions than they answer. Can we suppress memories to protect ourselves from the ugly truth? Are we able to retrieve and re-live even those dark thoughts which quickly fade into the abyss?

Psychiatrist (Dawson) is the fulcrum and most pertinent character in the story, her expertise in hypnotherapy coupled with her alluring and suggestive demeanor entices both male leads McAvoy and Cassel. At times she is reminiscent of the classic noir heroine, the femme fatale, as she beguiles and is able to plant seeds of doubt, influence actions and able to uncover lost memories when her infatuated male counterparts are entranced. The emotional pull of her story is expertly revealed in iterative fashion making for unexpected twists, turns and a pulsating finale. Those interested in human psychology will certainly find flashes of brilliance in Trance, the ambiguous nature of memory and puzzling nature of the workings of the human mind are fascinating themes. The fact that the elusive painting is a work of art by Goya is indeed fitting for the dark and subversive nature of the film.

Despite its best efforts, I found Trance’s complexity baffling at times, unable to tell apart the characters interlacing realities from their imagined projections. The characters are difficult to like and emotionally engage with (this again harks back to film noir) which make it hard to genuinely care for the outcome of the mystery surrounding the painting. At times, it felt Boyle was so caught up with trying to produce a memorable cinematic experience that basic plot devices were left out, resulting in periods of chaos.

Although Trance doesn’t rank with the elite of the psycho-drama Memento and Inception; I left the theatre feeling like I had been on a cinematic journey, a journey on which the exhilaration outweighed the confusion. I really got the feeling that Boyle really enjoyed making Trance, after years of being controlled and closely monitored when producing the Isles of Wonder (Olympic ceremony) he unleashes his precocious directorial talent in quite dramatic fashion.