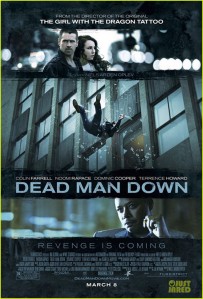 Plot: Victor (Farrell) is Alphonse’s (Howard) trusted partner in crime. When Alphonse begins receiving threatening messages, a quest to uncover the identity of the perpetrator ensues. Meanwhile Beatrice (Rapace), Victor’s mysterious neighbour, is keen to be involved in his troubled life.

Dead Man Down is the first foray into the English language for Danish director Niels Arden Oplev and marks a significant, well-funded milestone in what is turning out to be a promising career. Oplev rose to prominence in 2009 when he directed the feature length adaptation of Stieg Larsson’s inherently dark, often disturbing novel ‘The Girl with a Dragon Tattoo’. Given the resounding commercial success of the venture, Oplev’s stock rose rapidly across Hollywood. The Dane can be lauded for launching the fledgling career of Swedish actress Noomi Rapace, since the pair’s initial collaboration in 2009, Rapace has gone on to star in blockbusters such as Prometheus and Sherlock Holmes. Here the duo reignites their productive partnership in an unequivocally somber tale of redemption.

Dead Man Down is a brooding revenge thriller which despite an overwhelmingly muddled plot, has raw heartfelt emotion at its core. Noomi Rapace and Colin Farrel have undeniable chemistry in what unfolds as a stringent double-edged relationship. A destructive yet immensely necessary bond, one which allows for a mutual surpass of the inner turmoil they are burdened with. Their back stories pack emotional punch which is powerful enough to overcome Joel Howard Wyman’s screenplay. It is no surprise that Wyman has become a specialist TV series screenwriter; at times Dead Man Down suffers from a lack of cohesiveness due to its episodic nature.

Oplev and Wyman often attempt to interlace an overbearing expanse of unnecessary plot points into a linear narrative which certainly results in unnecessary confusion. The casting of Terence Howard as crime boss for example is an astute one; he is an intimidating presence who commands attention in confrontational encounters with Farrell. Look out for the expertly shot scene in the darkened room as a prime example. Rather than enhancing his back story, Alphonse’s (Howard’s) vagrant thugs are often thrust into the limelight along with the Albanian contingent of the story. Get past many of these low key scenes and a blistering climax awaits.

To Oplev’s credit, he has not crafted a run of the mill, archetypal revenge heist thriller. Instead Dead Man Down transpires as a multi-layered noir drama; Farrell plays the central role with verve and in a tragic key which pushes his performance beyond the perfunctory. Critically, in true noir fashion, there isn’t a hero to side with here. We are left to our own devices. Are we right to condone revenge? Would an eye for an eye result in the blurring of morality? Themes of bullying and the aftermath of disfigurement form central tenets to Rapace’s role, she excels in her finest performance since ‘The Girl with the Dragon Tatoo’. There is no question that Oplev truly knows how to get the best out of his protagonists.

The sinister thread is beginning to bind itself in Oplev’s work. Dead Man Down is no exception. Despite flaws in pacing and clarity, it makes for entertaining viewing, particularly as the story builds towards its gripping conclusion.