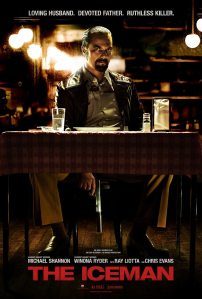 Plot: A seemingly devoted family man is whisked into the criminal underworld and hired as a contract killer. A role which begins to define his existence.

The deeply unsettling, almost unfathomable torment instigated by notorious serial killer Richard Kuklinski reverberates in the echelons of suburban New Jersey to this day. Kuklinski is the epitome of a cold hearted murderer, the depravity of his case has been cast into the public eye through various media in recent times. Numerous documentaries and biographies have attempted to drill beneath the surface to unearth a holistic version of such treacherous, inhumane barbarity. Compelled to translate the story onto the silver screen is the largely unknown cult Israeli film-maker Ariel Vromen. Vromen’s ensemble cast is led by one of the finest performances of the year from the mercurial Michael Shannon. Arguably the most underrated actor in modern day cinema, The Iceman will long be remembered as the film which stretched Shannon to darker and more illustrious heights.

Shannon’s mesmeric performance is perfectly balanced, deeply affectionate as the inherently loyal family man whilst brutally sadistic as the cold hearted hitman. The Iceman unfolds as a dark portrayal of the life Polish migrant Kuklinski, the most striking chord being the seeming detachment of his two distinctive personae. Are we able to lead two disparate lives without feeling morally corrupt? Guilt is the most grinding and malignant emotion, it can often seize the captive into submission and cause long-term psychological trauma. The absence of such remorse is the mark of a deeply troubled individual, a man who is undeterred by even the foulest debauchery has no conscience and therefore no limit.

The Iceman, ferociously portrays the trials and tribulations of a family man embroiled in the criminal underworld. There are no holds barred by Vromen. Make no mistake, this is deliriously violent and often borders on numbing the audience into a collective shell. One can argue that The Iceman borders on the excessive. It certainly paints a distressing portrait of a troubled soul and leaves the viewer feeling cold after the final credits. This tumultuous archive is one which certainly isn’t for the faint of heart. Fans of classic gangster film Goodfellas will enjoy Ray Liotta’s turn as crime boss and can revel in various subliminal nods to the classic.

Despite its intensity, there are moments of real warmth in The Iceman. The chemistry between the returning Winona Ryder and Shannon is striking and ensures there is respite amidst the chaos. Intrinsically, man is built to provide and protect his own at all costs but to what extent can we apply this rule? Are some born evil whilst others are chosen to be great by divine intervention? The Iceman is gripping and a real triumph. The film’s limited release in the UK is a real travesty and will rob audiences of witnessing one of the finest crime thrillers of the year thus far.