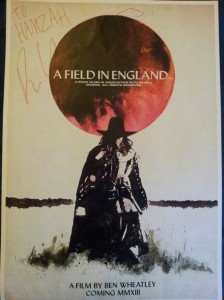 Plot: During the English Civil War in 1648, a band of soldiers and scholar (Reece Shearsmith) escape from their respective duties and seek to escape battle. They come across an alchemist, O’Neil (Michael Smiley), who commands the group to locate treasure in an uncomprehensibly barren landscape.

On Monday 8th July 2013, I was given a press pass to attend the exclusive East End Film Festival Q+A screening of Ben Wheatley’s revolutionary ‘A Field in England’ at the Hackney Picturehouse in London. Director Wheatley, key members of the crew and production company Rook Films were on hand to take questions from an expectant audience in an extensive discussion following the screening.

My question for the panel was around the thought process involved in what is the boldest and most innovative release strategies ever seen. Developed in partnership with the BFI and Film 4, A Field in England is the first UK film available simultaneously across platforms. It was distributed in cinemas, on Film4, VOD, and on DVD/Blu-ray, all on 5 July 2013. The response was that more people would see the film this way than if given a traditional cinema release, A Field in England would have only made it into around 20 cinemas across the UK. There would be no hype generated and the micro budget film would eventually be released onto DVD months down the line without any funding to promote it. It quite simply was a risk worth taking. It is a marketing masterstroke and aptly demonstrates a group who understand modern media consumption. The results of the experiment have been promising and can be found here : http://blog.film4.com/a-field-in-england-multiplatform-release-the-results/  For more information on the making of the film and how to watch it: http://www.afieldinengland.com/

A Field in England is the most abstract, audacious and ultimately mesmeric piece of cinema to eminate from the British Isles in years. Wheatley invites audiences on a psychedelic headtrip which oscillates between the polar extremes of the human psyche. It suffocates and liberates in almost equal measure, never losing its vivacious grip of its captive audience whilst smoldering in its aphotic glory. It is a film which must be met halfway, it must be experienced rather than necessarily enjoyed, those looking for a linear plot and conclusive finale will be left frustrated by Wheatley’s most transcendent outing to date.

Reece Shearsmith produces a tantalising performance as the captive Whitehead. A Field in England features the most haunting scene of the year thus far, the tent episode is simply stunning and will ensure A Field in England goes down as a cult classic. The lifeless grin on Shearsmith’s face as he emerges from an encounter with the alchemist O’Neil (Michael Smiley) epitomises how the cast moved mountains to satisfy Wheatley’s harrowing vision. The spellbinding culmination is bewildering and raises more questions than it answers. The pursuit for treasure, the role of O’Neil and the unnerving expanse of the field can be interpreted from wildly contrasting viewpoints. Are in fact the characters seemingly navigating the realm of purgatory? The religious undertone and dialogue between the characters would certainly support this theory. Or is this simply a portrayal of the harsh psychedelia of ingesting the mushrooms in the field itself? All are open for discussion, as with any Wheatley film, the viewer must solve the conundrum.

Wheatley has cemented his status as one of the most daring and ambitious filmmakers in modern cinema. The decision to shoot in black and white adds a gritty realism to the action. The monochromatic effects are expertly executed. A Field in England was shot in 12 days in 1 location and on a shoestring budget, there are no limits to what can be achieved in Wheatley’s career. A film of such complexity and lofty ambition will sadly pass under the mainstream radar, it is the most unique film to be released this year and quite arguably the most memorable.