On Friday 23rd August, I was fortunate enough to attend Day 2 of Film 4 Frightfest at Empire cinema in Leicester Square, London. Frightfest has established itself as one of the world’s leading Horror fantasy film festivals since its inception in 2000 and attracts hordes of fans, critics and top genre talent from across the globe. Frightfest spans 5 memorable days and encompasses film premieres, exclusive sneak-peek previews and guest appearances.

A found footage film which follows a group of amateur documentary film-makers seeking to re-enact and uncover the truth behind one of Russia’s eeriest incidents, where 9 experienced ski hikers were mysteriously found dead in the unforgiving Ural mountains in 1959.

Another Russian disaster film following Chernobyl Diaries (2012), this was a real surprise package and a strong introduction to Frightfest. To Renny Harlin’s (director) credit, this is well researched film-making which intersperses factual findings throughout to form a neat intersection with the dramatic found footage. Despite a slightly labored opening, the unlikely yet daringly bold final thirty minutes are worth waiting for. The picturesque yet unforgiving nature of the freezing landscape adds to the unnerving feeling of total isolation. Newcomer Holly Goss excels and is one to watch. Mind-bending, conspiracy theorists will love this. 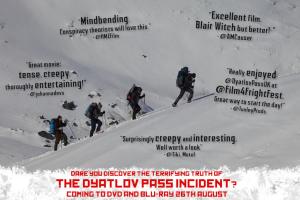 HMZFilm tweet has been used in Dyatlov Pass Incident’s UK marketing campaign to promote the upcoming release on DVD/Blu-Ray. Star of the film, Holly Goss, has also endorsed my review by re-tweeting my views to her followers.

A child protection services officer and her camera crew investigate deeply troubling cases which are inextricably interlinked in the rural Indiana town of Daylight.

Although Daylight is another addition to the increasingly saturated found footage sub-genre, this deeply confusing yet undoubtedly atypical feature is memorable for its unexpected descent into chaos. Split across two tapes, the first is a well-trodden path of investigative work which is emotionally disturbing but lacking originality. The second tape shifts through the gears and spirals into unchartered territory reminiscent of the likes of Silent Hill. A metaphorical collage of mismatched imagery serves to stimulate a powerful headache. Daylight is a film to be experienced rather than necessarily enjoyed

Ben Wheatley is honored with the much coveted Variety award following an on stage interview + question and answer session with the audience.

I’ve been fortunate to meet British director Ben Wheatley on two separate occasions (ABCs of Death Q+A screening and A Field in England Q+A screening) prior to Frighfest. He never ceases to amaze me with his humble nature. Wheatley discussed his gradual rise in becoming one of the UK’s leading talents.

He talked about his time spent unemployed, his experience as an editor in marketing and his need to self-fund his bold ventures. I met Wheatley before the screening for a picture and was given a free blu-ray for asking a question during the Q+A session. A fascinating insight and a welcome interlude between films.

The third and concluding chapter of the gruesome slasher franchise. The haunting legend of Victor Crowley has been cursed and has returned to inflict carnage on Honey Island Swamp

Hatchet 3 is a gore-fest and makes Fede Alvarez’s Evil Dead (2013) look like a romantic comedy. A barrage of crowd-pleasing, inventive ways of murder are blended together to conclude the trilogy. Gore-hounds will relish this homage to classics such as Friday 13th. There are moments of comic relief but this style of exploitation cinema isn’t to my taste.

The charismatic Adam Green introduced his new series Holliston (coming soon to the UK) and was sure to quash any rumors of further Hatchet outings.

In the days preceding the Spanish Civil War in 1931, a group of children who are insensitive to pain are deemed to be a danger to society and are incarcerated in a remote hospital in the Pyrenees. Meanwhile, a man is on the hunt to track down a prospective donor who can save his life from cancer.

Spanish feature Painless was the highlight of the day and by some distance. A mesmeric fable of the preciousness of life enjoined with a somber illustration of a lie echoing from one generation to the next. The very essence of what it means to be alive is explored from an abstract, almost mythological lens. Likenesses can be drawn to classic Spanish horror such as the Devil’s Backbone. Painless is a deeply moving, refreshingly original and spellbinding first feature from Juan Carlos Medina. The operatic finale is a truly memorable piece of cinema.

Sequel to the groundbreaking found footage horror anthology V/H/S which set the benchmark for numerous inferior spin offs such as ABCs of Death.

V/H/S 2 will be remembered for the collaborative Indonesian cult segment from director of The Raid Gareth Evans and exceptionally talented genre director Timo Tjahjanto (great interview) . In an ultra-violent mishmash of cult ideology and action, the thirty minute short ‘Safe Haven’ is a masterclass of how to marry classic horror elements with breakneck action set pieces. It is not for the faint of heart and has clearly been built to satisfy hardcore genre fans. Epy Kusnander is superb as the demented cult leader. Adam Wingard’s robotic eye segment is creepy whilst the alien abduction and zombie segments are mildly entertaining rather than frightening.

The screening was followed by a Gareth Evans Q+A where the Welsh director spoke about his experience shooting ‘Safe Haven’ for V/H/S 2 and to the delight of the expectant audience, Evans gave us a sneak peek of The Raid 2 (released next year). It is safe to say, fans of the original will not be disappointed!