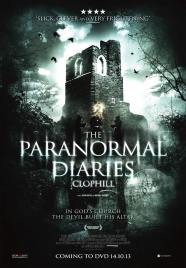 Paranormal Diaries: Clophill premiered at international genre festival Film 4 Frightfest in 2013 to overwhelmingly positive reactions across the horror community. We follow a documentary style investigation which visits a church ruin in Clophill, Bedfordshire in the UK. The film examines the haunted site where a dark coven of witches are said to have gathered to perform a black mass in March 1963, a series of deeply disturbing acts were performed which have been inscribed in local folklore.

Kevin Gates and his expert team have created a tense and incredibly atmospheric piece of work in what has to be one of the most haunted locations in the British Isles. In a career which rose to prominence with the Zombie Diaries films, Gates now delves into a world far more sinister in nature.

HMZ Film caught up with Kevin Gates to discuss why he is fascinated by the horror genre and his driving force behind making Paranormal diaries: Clophill. We discuss Kevin’s most terrifying experience whilst making the film and the exciting future plans in store of the promising film-maker.

HMZ Film: What inspired you to pursue a career in the horror genre? Has it always been an ambition of yours?

Kevin: As a kid I’d always enjoyed the Hammer horror films and it was mainly stuff on late night TV that I’d watch growing up. But I think an important moment was when I caught John Carpenter’s THE THING at some point in the mid 80s and even then it was on a small black and white portable TV. That film made a huge impression on me and I spent a lot of time up at my local video store pouring over lurid horror movies, particularly the Italian horror, sci-fi and fantasy movies with their incredible artwork. At school I studied painting and ended up at art college where they ran a film-making course. Being a film buff by this point I signed up immediately and never really looked back. I started off making short horror movies and carried on through university making experimental shorts. But I decided quite early on that I didn’t want to work for someone else and didn’t want to work my way up the ladder in the hope of being noticed and get to direct a film when I was 40. If I was going to make it, I had to do it my own way and make the kind of horror films I enjoyed watching as a kid.

HMZ Film: How did you first become aware of the Clophill legend? It is clear that an intensive amount of research has gone into the making of the film?

Kevin: It was a cold night in the Autumn of 1990 when I first went up to Clophill and it was a distraction from the usual monotony of hanging out at the local pond. We drove up the dirt track to old St Mary’s and from the back of a crowded and beat up Ford Cortina saw the silhouette of the ruin. It was creepy as hell and as no-one knew anything about the place other than rumours of witch burnings and the church facing the wrong way we were terrified but I was also intrigued. It took some years before I went up to Clophill again and with my film-maker hat on knew it had potential for a movie. It wasn’t until late 2009 when I was waiting around for another film (ZOMBIE DIARIES 2) to happen that I decided to move forward with the Clophill film. I started to do some heavy research at the local archives and trawled over every messageboard online until I tracked down some useful information and importantly, some witnesses. I then assembled a crew made up of local friends and booked everyone in for a weekend at Clophill in June 2010.

HMZ Film: What sticks out as your most terrifying experience/memory in making the film? Has the paranormal experience altered your outlook on life?

Kevin: Some scary stuff happened to the other members of the crew, particularly the security guards and this is all revealed in the film. The security team weren’t there to be in the film, they were there to lock the place down so we wouldn’t be disturbed during filming. But things started to happen and at one point we rushed outside to find one of them in tears after seeing something they couldn’t explain. Clophill has that eerie atmosphere about it. I went up there on my own for research purposes, only armed with a torch and nightvision camera. I became alert to every single sound in that lonely churchyard. I remember standing in the exact spot where one of the witnesses had told me they saw a glowing apparition and the hairs were standing up on the back of my neck. Fortunately nothing materialised on that night but I was glad when I made it back to my car.

HMZ Film: The film had its world premiere at Film4 Frightfest, a huge accolade for a genre filmmaker. How did you find the experience overall?

Kevin: It’s an incredible experience having a film at somewhere like FrightFest. It is the platform for UK horror so I felt very honoured that the FrightFest team had enjoyed the film enough to select it for this year’s festival. This film more than any other I’d worked on had been a solo-effort for so long, so it was kind of a release to finally get it out and show some people. Sure, you’re always nervous how a film will play on its debut, but the film was well received by the horror fans so I was very pleased. It’s quite different from THE ZOMBIE DIARIES films and is much more subtle and a something of a slow-burn along the lines of the BBC’s GHOST WATCH.

HMZ Film: What made you decide on the documentary style format of the film? How do you feel about the found footage sub-genre which has emerged in horror over the past few years?

Kevin: It was a choice I made because I was so into the whole mystery of Clophill. I loved tracking down information about these clandestine figures desecrating tombs, performing rituals and then disappearing into the night and I had to stay true to that format, so a documentary was the only approach. But being a huge fan of a lot of the older creepy films and television programmes such as THE STONE TAPE and GHOST WATCH I also knew there was potential to do something a bit different and to make the film become something of a mix of fact and fiction, with an emphasis on fact. This is a really important element of the film and I always let people know that approximately 90% of what you see in the film is completely real. I hope the audiences have some fun working out precisely what is real and what isn’t as it really isn’t always clear. As for the found footage sub-genre as a whole, I think it is becoming rather tired and that’s one of the reasons for a slightly different approach with THE PARANORMAL DIARIES. If you’ve seen ZOMBIE DIARIES 2 I dispensed with the found footage motif entirely in the final scene of the film and that was an important statement for the series and for me as a film-maker.

HMZ Film: Can you give us some indication on what to expect on your exciting forthcoming paranormal investigation into the Mothman prophecy?

The Mothman story came about when I was researching Clophill. There’s a wood a few miles from Clophill where an incident of animal mutilation occurred a few weeks after the famous incident at Clophill in 1963. It was believed to have been carried out by an occult group, possibly the same as those who were at Clophill. As I researched the wood for further information I stumbled across a story from 1979 about how a group of children on a picnic in the wood witnessed the Mothman apparition in broad daylight. Normally one would dismiss the story, but the witnesses are now in their 40s and still stand by what they said they saw. I then met an ex-soldier who, along with a friend came across a huge black dog in the wood one night in around 1986. Again, he’s much older now and hasn’t changed his view on what he saw that night. I’ve since discovered the area has long been a hot spot for occult activity. The key with the follow up is not to repeat the formula of Clophill. Real witnesses will feature once again, but the format will be different this time round. It’s important to try and be progressive as a film-maker and even when making a sequel, it’s important to give the audience something different.

We thank Kevin for taking the time out to speak to us and wish him all the best for an exciting future. He will always have a friend and supporter here at HMZ Film.

To follow the progress of the film: Check out the official Facebook page and purchase the film on DVD here