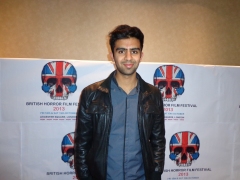 and promoting independent genre cinema, this year was no different.

The two day celebration of the macabre was capped by an awards ceremony (hosted by the entertaining Bunny Galore) to celebrate and promote the talent on show. Three expert judges cast their watchful eye over all entries to determine the prize winners. The panel consisted of the academic expert on horror Dr Karen Oughton, winner of the 2012 British Horror award Dan Brownlie and mastermind behind the new Space Monsters Magazine Richard Gladman.

Steven Stone’s supernatural chiller Entity was crowned winner of Best Feature film and deservedly so. A startling deep dive into a conspiracy of staggering proportions, the film follows documentary film-makers intent on uncovering the mystery behind one of Siberia’s most disturbing unsolved cases.

It was Mark Fisher’s ‘Belly of the Wolf’ short film which scooped the British Horror award capping a hugely successful night for the entire cast and crew.

Here is a breakdown of this year’s winners:

THE WINNERS OF THE BRITISH HORROR FILM FESTIVAL 2013

Best Director – BELLY OF THE WOLF Dir. by Mark Fisher

Overall, it was a great night with a bunch of talented people which was very well organised! We look forward to next year