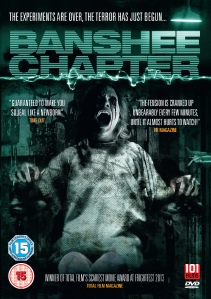 To celebrate the DVD release of Banshee Chapter in the UK, HMZ Film has teamed up with Intense productions to secure an exclusive interview with director, Blair Erickson. Backed by Zachary Quinto’s Before the Door Pictures (‘All is Lost’, ‘Margin Call’), Banshee Chapter has taken the horror world by storm garnering rave reviews from across the community.

Winner of Total Film’s Scariest Movie Award at Film4 FrightFest 2013, Banshee Chapter tells the story of the story of a journalist’s exploration into the disturbing links between her friend’s sudden disappearance, an ominous government research chemical, and a disturbing radio broadcast of unknown origin. The film is based on true events and real accounts of the US government’s involvement with human experimentation.

HMZ Film: Banshee Chapter is your directorial debut, what inspired you to become a horror film-maker?

Blair: I think I’ve always been interested in cinema, from as far back as I can remember. If I really trace the origin, it goes back to watching “Jaws” as a little kid. The power of movies to transport you into a whole other place, whether beautiful or terrifying, is something that fascinates me.

HMZ Film: Tell us about the genesis of Banshee Chapter and how you got involved in the project?

Blair: I had been writing and directing short live action web episodes for Fox’s Terminator series and Dreamworks and I just started wondering why I wasn’t doing it for my own stories. I sat down, started writing out this crazy story. I knew I had wanted a story that had a deeper undercurrent. Something that worked on multiple levels, as a horror tale, as a metaphor, and as a story laced with secrets to unlock.

HMZ Film: Did you ever feel intimidated about depicting a mind control conspiracy theory? And to what extent were you inspired by H.P. Lovecraft?

Blair: My biggest fear was trampling on the memories of real life people by using a fictional take on a real event. The goal was to conjure up a terrifying piece of fiction, but with enough true elements at the core that it would inspire the audience to ask their own questions.

MK-ULTRA was a real program, they really tested horrifying chemicals on unsuspecting Americans, and the deaths were real. But in usual American fashion we swept it under the rug. That kind of dismissal is incredibly toxic to our culture and our society. It’s allowed a rather dangerous entity to grow unchecked within the intelligence apparatuses in our government. Is it any wonder it lead to things like the NSA?

When I was writing it, the NSA spying on Americans stuff was considered a kooky fringe conspiracy theory, and I knew from reviewing the evidence that there was some hard truth to it. But nobody wanted to acknowledge it.

I think mixing in the H.P. Lovecraft was only appropriate considering the tale structurally had taken on such a similarity of his work. I grew up with this stories, so I’m sure they must’ve influenced my writing. It’s important to recognize that and in a way tip your hat to the artists of the past who create the great cultural and mental structures we build on top of.

HMZ Film: The faux documentary style works very well, why do you think the found footage sub genre has become so prevalent in modern

Blair: It’s one of the most effective psychological tools to create immersion. Traditional filmmaking techniques allow the audience to keep a bit of mental distance from the characters. It’s very much like a third person video game. But switch it to first person perspective as found footage does, and suddenly that psychological distance is gone. Found footage gets unfairly maligned by some. Maybe because it’s easy and often exploited. But it’s a great tool in the filmmaking tool box that shouldn’t be ghettoized. Nothing else can create that sensation… yet. But wait till people see what the Oculus Rift does to their brains. Heh.

HMZ Film: Talk to us about how you assembled such a brilliant cast including the likes of Ted Levine (Silence of the Lambs) and Katia Winter (Dexter)?

Blair: Ted was easy, we made a list of the best possible actors to play Thomas Blackburn and he was top of the list. We sent him the story, he loved it, done within 24 hours. Finding Katia Winter was much much harder. In the end we looked at hundreds of actresses and ended up having to fly her in from Sweden.

HMZ Film: You must be delighted with the positive reception towards the film? Do you hope to build a career in the genre?

Blair: I am incredibly thrilled that people are loving the film and I have a lot of interest in telling my next story on film. As far as a career, I think that comes naturally when you’re passionately building and creating what you truly love. It’s up to the audience and critics I guess to decide whether you can make a career out of it.

A big thank you to Blair for taking the time out for this interview and Intense Distribution for making this happen. HMZ Film wishes the film every success.

Check out the trailer . The film is available to order on Amazon and iTunes.  You can also follow Banshee Chapter on Twitter  and Facebook  to keep up to speed on the latest news.