Plot: Set in 1985, electrician Ronald Woodruff is diagnosed as HIV positive. Unsatisfied by the medical care he is given, Woodruff takes the law into his own hands and begins supplying unapproved drugs to fellow AIDS patients.

Jean-Marc Vallée’s darkly comic yet bruising biopic on the remarkable life of Texan electrician Ronald Woodruff lands a dizzying emotional sucker punch. Grounded by revelatory performances from a seemingly re-born Matthew McConaughey and incomprehensibly transformed Jared Leto, Dallas Buyers Club is a gritty magnification on the defiant survivalist instincts of a maverick rodeo. Left in a state of limbo for years due to a lack of funding, the reality is that the Dallas Buyers Club may never have filtered through to mainstream consciousness if it weren’t for McConaughey’s attachment and insistence to get the film made. His passionate and entirely believable performance as Woodruff is nothing short of astonishing, a career defining role in every aspect. If he doesn’t win the best actor gong come March, then he never will. 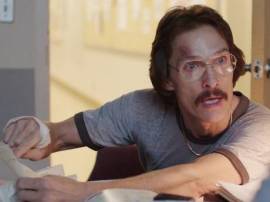 The unsanitary nature of the Woodruff’s character is exaggerated to provide the necessary room for emotional development. Woodruff is presented as detestable creature, he is a misogynistic homophobe who is addicted to hard drugs and engages in vociferous, promiscuous sexual encounters with a multitude of women. A selfish maverick who believes in his own invincibility even when faced by certain death as witnessed in the tagline ‘’Nothing can kill Ron Woodroof in 30 days”. It is not until his illness begins consuming his being that Woodruff confront his own mortality (‘I’ve only got one life and I want it to mean something’) and embarks on a transcendent (although selfish) journey towards the unlikeliest anti-establishment hero. It is testament to McConaughey’s immense performance that his transformative weight loss is not the prime focus. Instead, it is the unashamed vulnerability that strikes a rhapsodic chord, this strand of his display is visible most openly in the heart-wrenchingly tearful breakdown in his car. It is a stellar turn which can only be remotely challenged by his role in the superb Mud (2013). McConaughey will lead an all-star cast in Christopher Nolan’s Interstellar in 2014, he is at the peak of his powers and appears to have no limits.

The role of composite characters Jared Leto and Jennifer Garner breathe much needed warmth into an otherwise taciturn and depressing subject matter. Leto plays Woodruff’s business partner (Rayon), the transgender HIV sufferer graces the screen with a memorable brand of heartbreaking subtlety. Rayon offers an avenue to the gay community which Woodruff effectively closes due to his unequivocally bigoted nature (‘only fags get aids’). At first their relationship is strictly business but as time elapses they become entirely necessary to one another’s existence; their friendship iteratively unshackles Woodruff’s prejudice towards the gay community and offers a stark reminder that we all face a common fate regardless of creed, sexual orientation or race. 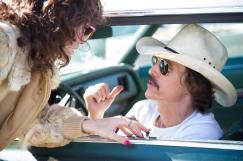 The volatile early days of the AIDS epidemic and the role of the FDA (US Food and drug administration) is depicted with an unabashed bias. Borten and Wallack’s script evokes a stirring sense of injustice due to the overtly corrupt and bureaucratically whimsical medical laws at the time. Surely a terminally ill person has the civil liberty to self-medicate regardless of whether the drugs used are medically approved? The role of the pharmaceutical industry is increasingly being examined by the film fraternity. The Constant Gardener (2005) and Steven Soderbergh’s Side Effects (2013) quite wilfully expose fraudulence on part of these corporations. As in Dallas Buyers Club, they are unashamedly driven by greed and licensing agreements. Woodruff’s inventive business model of creating a subscription based club supplying unapproved drugs from across the globe illustrated that David can indeed challenge Goliath.

Dallas Buyers Club is a performance drama and its sensational acting will certainly be its legacy. The harsh and at times overwhelmingly gritty depiction (rightly so) of the symptoms of AIDS packs no punches. It is unbearably grim at times. That being said, the darkly comic delivery of a somber tale offers flashes of light and allows us to celebrate a juggernaut of a performance.