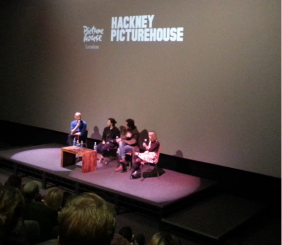 On March 15th 2014, HMZ Film attended a special Q+A screening of Under The Skin at the illustrious Hackney Picturehouse in East London. The screening was followed by an extensive discussion with director Jonathan Glazer, composer Mica Levi and producer James Wilson. Glazer explained that the project had been on his mind/in development for the past decade and he subsequently spent a solid three years co-writing the script. The inspiration and driving force behind the Brit’s dedication was the lasting impression made by Michel Faber’s haunting sci-fi novel.

Fascinated by the role of the central female protagonist (played by Scarlett Johansson), an infinite amount of time went into synthesising the rich source material and stripping out elements of back-story that would be left out of the cinematic adaptation. Many of the sell-out audience’s questions revolved around Johansson’s casting. The producers acknowledged that a star was needed to fill the key role in Glazer’s abstract screenplay. The star’s involvement no doubt elevated the commercial potential of the venture and attracted the required funding. For those mystified by the hidden camera style footage in Glasgow, the first half of Under the Skin will find it incredible that Johansson was able to walk around and interact with members of the Glaswegian public and not get recognised! My question was greeted with a ceremonious round of applause as I heaped praise on Mica Levi’s sensationally blood-curdling score. It is sure to become a seminal piece of Sci-Fi music in the coming years. Glazer agreed with my interpretation of the film which you can read below: 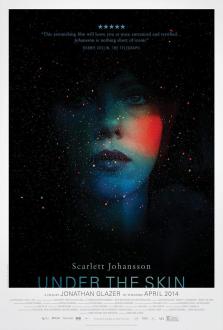 Under the Skin is a quasi-melancholic marvel. It is draped with a hallucinatory veil that glimmers with a profound strangeness. Glazer’s abstract and expressionistic brand of film-making has an intensely magnetic pull that draws you in as it spins its elaborate web. The Brit has crafted a masterfully intoxicating seduction awash with wondrous and artful imagery; a piece of cinema that lingers on the mind long after the final credits fade to black. The film translates as a Sci-Fi fable driven by a powerfully understated turn by the supremely talented Scarlett Johansson. The star plays the femme fatale with a hauntingly sexual energy, she is an other-worldly seductress who casts a spell upon her doomed victims. Elements of Under the Skin can draw likenesses to Roger Donaldson’s Species (1995) although this is a far more refined affair. 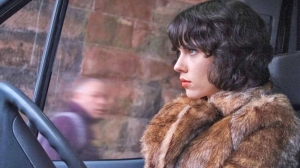 From the mind-bending opening frame through to the chilling finale, Glazer purposefully leaves the viewer in a state of perpetual flux as we observe the world through an alien’s eyes, occasionally given visual cues to shift the narrative through its often ponderous gears. Glazer charts the lifecycle of an organism from its conception, conscious livelihood and ultimate extinction. There is an undoubtedly fatalistic approach to Faber’s source material and an appreciation of mortality. Under the Skin philosophically muses on the social, physiological and mental evolution of Johansson’s character. As each frame develops, she iteratively gains a thread of humanity.

The characters primal side is unleashed in the first half of the film as she entraps her male victims. Shot with a series of hidden cameras around Glasgow, Laura (Johansson) drifts around the remote Scottish streets luring in a series of male hitch-hikers. The scenes of seduction in the jet black expanse of her lair are immensely powerful and allow Levi’s score to flourish. Each victim’s fate is chillingly depicted, as the lustful men walk toward their demise it as if thought their souls are being drowned into an endless abyss. There is a mindlessness and lack of self-awareness on the part of the rogue in the first half of the film; her thoughts are feral and drive her to fulfil her animal instincts: to kill. This hunger to kill is most evident in the traumatic beach scene where she uses a rock as a deadly weapon upon a fallen man.

As life begins to move forward, the existentialist aura is amplified. There is a form of catharsis that takes place as the ethereal predator begins to explore her human shell. Glazer intersperses the second act with moments of subtle brilliance; the protagonist begins performing basic human necessities such as eating and sleeping. She is shown compassion by an outsider who cares for her which offers a welcome interlude of happiness. It is as though each life experience accumulates and brushes her with kindness that gradually transforms a machine into a semi-conscious organism. 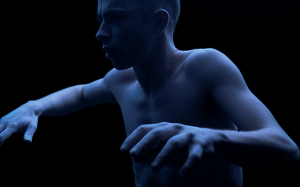 The breathtaking climax is visually brilliant but will leave more questions than answers. This is not a typical narrative, Glazer doesn’t spoon feed the audience plot points. Many will feel insanely lost and perplexed by the sheer ambiguity of Under the Skin. Of course with such lofty ambitions and abstract storytelling, there are moments which feel disjointed and don’t tie together such as the underwritten role and actions of the omnipotent protector (riding a motorcycle). There is also a slight overkill on scenes of nudity which will repel a portion of the audience.

Films like these don’t often come along very often. Under the Skin lingers in the mind in a similar fashion to Nicholas Winding Refn’s Only God Forgives. Tantalising, intriguing and unique; there has not been a more effective and haunting soundtrack composed in years. Glazer’s adaptation etches a new genre for itself; such is the lasting power of this transcendent experience.