Plot: The king of monsters, Godzilla, is awakened by humankind and the monster is faced with an adversary far greater than the US Army

Gareth Edwards’ legendary Kaiju spits fire and incinerates its vastly inferior 1998 predecessor and succeeds in returning Godzilla to its iconic origins laid out by the late Japanese visionary Ishiro Honda. Honda’s Gojira (1954) was a deeply brooding and apocalyptic vision inspired by the explosive trauma suffered by the Japanese, at the hands of the United States, in the form of the atomic bomb devastation in Hiroshima and Nagasaki in August 1945. Godzilla was initially presented as a melancholic manifestation of nuclear power and its destructive capabilities. The entire concept was born out of tragedy. Over the years, through its various guises and multiple depictions, the monster is often presented as a symbol of heroism rather than the stark warning against nuclear warfare. Whilst British director Gareth Edwards doesn’t swim in Godzilla’s troubled waters, his re-boot is a thrilling romp that stomps and smashes its way far beyond mediocrity and into enthralling territory. 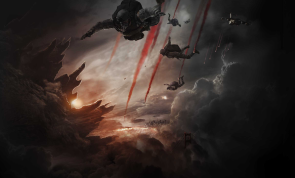 Although contemporary parallels will undoubtedly be drawn with Guillermo Del Toro’s uninhibited monster mash-up, Pacific Rim (2013), Godzilla locks horns and emerges victorious as the king of the juggernauts. Edwards cloaks his monster behind a veil of secrecy for much of its duration, expertly building a sense of dread; a slow burning anticipation of what might unfold. This is a sprawling epic viewed through an intimately human lens; the issue is that (bar the brilliant Bryan Cranston and Ken Watanabe) the characters aren’t charismatic nor are they particularly memorable upon reflection. They fade into insignificance and are sadly dispensable in the grand scheme of things. Godzilla may frustrate a generation expecting instant rewards; it’ll purposefully make you wait for that incandescent flash of blinding brilliance, teasing and prodding a nerve before sending you tumbling into a vortex of awesomeness. Make no mistake, Edwards’s film is at its imperious best when its shackles are torn off and monster is unleashed.

Edwards’ is interested in the human reaction to watching the battle of the beasts, how do we respond, as a species, when nature revolts? The fear of losing control is of paramount importance to the script; if we are unable to control an outcome then chaos and fear reign. Dr. Ishira Serawaza’s (Ken Watanabe) encapsulates the feeling ‘The arrogance of men is thinking nature is in their control and not the other way around. Let them fight.’

Godzilla in the city (copyright Warner Bros and Legendary Pictures)

The troublesome aspect with Borenstein’s screenplay is the alternative version of historical events that are portrayed that completely contradict Honda’s vision. It is said that the USA’s Pacific bomb tests back in the 40s and 50s were designed to kill the monster rather than a test designed to assess its nuclear capabilities. It is infuriating to see such spin put on events to cast a light on the US as a beacon of humanity. In a world which is infiltrated with uncertainty amidst threats of terrorism, uncertain geo-political relation and climate change; Godzilla can represent any number of metaphors. An embodiment of the threat posed by terrorism? Allowing superpowers to battle amongst themselves whilst supporting one side? Despite some of its shortcomings, the powerful depiction of the king of monsters is monumental in every sense of the word. Being able to build a creature feature with such focus on the human element is a rare feat and one which Edwards has taken a more than creditable stab at. The legacy of the reboot will be the fantastical battle sequences which need to be seen to be believed. The monster can take any meaning in any shape or form; it is a vessel for the subtext and one which will continue to endure.