Earlier this summer, I was delighted to take my ongoing relationship with HorrorTalk to the next level and become a fully fledged staff writer. It’s a privilege to represent the site at various film festivals, press events, screenings and to have the opportunity to review an eclectic mix of genre cinema from across the globe. Click here to see my staff bio

Below is a round-up of all of my reviews for HorrorTalk to date and to announce some huge news. 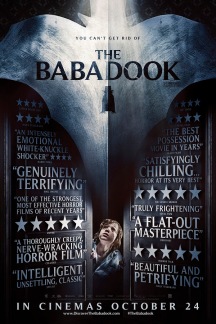 Australian horror sensation The Babadook hits UK cinemas nationwide on 24th October 2014 and my 5 star HorrorTalk review has been quoted on the poster! It was a nice surprise to see the billboards and posters across London.

Here is a snippet from my glowing praise for the film–  click here to read it in full:

‘The Babadook crawls under the skin with a bloodcurdling menace; it unsettles with its uncanniness before spitting out a jet-black spray of venomous terror. Beneath its brilliantly woven fantastical elements, The Babadook is without question one of the most emotionally captivating, character-driven genre films to emerge in recent years’

Below is a round-up of other films i’ve been ranting and raving about for the site:

‘The Samurai is an exploration of the unconscious mind channeled in the form of a wildly experimental, contemporary slasher romp. The rookie German writer/director’s examination of the alter ego spirals out of control in a death defying descent into the insecurities that are buried deep within our hearts.. This ultra-violent, atmospheric head trip is beautifully shot and is backed by a sensational score.’

The House at the End of Time- 3.5 stars- click here for the full review

‘It is the first Venezuelan horror film to reach a truly global audience and hopefully won’t be the last. Hidalgo’s first feature film pales in comparison to Juan Carlos Medina’s Spanish language 2013 Frightfest hit, Insensibles (Painless) but still succeeds in weaving its ghostly magic. Clearly inspired by a referential mix of auteurs such as Guillermo Del Toro and HP Lovecraft, Hidalgo’s film is at its best when it primes in on the haunted labyrinth of its spectacular gothic mansion’

‘De Jong’s psycho-horror is sure to leave you feeling cold, burnt out and in dire need of a hug. It is about as heavy going as it gets. First time screenwriter Mark Rogers has quite brutally explored the treacherous impact of domestic violence in Deadly Virtues but it is so deeply buried beneath the torturous moments that it fails to connect with its audience’

‘It is a highly experimental psycho-horror that would be reminiscent of the bastard child of a flawed Argento-Lynch collaboration and a grungy grindhouse thriller. Forzani and Cattet have created a wildly ambitious interpretation of the hyper-surrealistic elements of the Giallo and caked them in subversive and undeniably sensual metaphors; the memorable stylistic influences are drawn from the richness of 19th century Art Noueveau.. it is a tall order to find a more provocative genre film this year’

‘Vincenzo Natali’s ghostly chiller, Haunter, is a deliriously inventive spin on the archetypal ghost story but it lacks the atmospheric tension required to unsettle and hence evoke a feeling of dread.There can be likenesses made with Alejandro Amenabár’s seminal classic The Others (2001) and even a mutated form of Harold Ramis’s Groundhog Day (1993)

‘Willow Creek ratchets up the tension with a stomping blend of unrivalled authenticity, eminently realistic character dynamics and a slow burning transition of fear that is both unsettling and perfectly paced. Inspired by the infamous Patterson-Gimlin footage in 1967, we follow a couple’s determined efforts to film a documentary on the legend of Bigfoot’

‘The Hypnotist is underpinned by strong performances and dazzles in its tension-fuelled glacial finale. With that typical Scandinavian darkness and surprising bursts of violence, Hallström’s film is at its best during the scenes of hypnosis where it’s reminiscent of watching a master craftsman unpick a lock without the key. These moments ask pertinent questions on the hidden aspect of the human psyche that we rarely seek to explore. Is our memory just a concoction of events we care to store? At face value The Hypnotist is an enthralling thriller, it’s only when we are put to sleep in that chair that we begin seeing the cracks beneath the surface’

‘James Franco’s Child of God delves into the Southern Gothic and into one of the earliest works of one of America’s most treasured novelists, Cormac McCarthy. The Rhode Islander’s novels have a long standing history of cinematic adaptations, notably in the form of the award winning Western No Country for Old Men (2007) and post-apocalyptic The Road (2009). Child of God translates as an entirely antithetic and savage beast. Set in the sparse and mountainous Tennessee; we follow the iterative mental, psychological and disturbingly sexual degradation of the violent Lester Ballard (Scott Haze)’

‘ The final cut represents a lavish renaissance of an undoubted cult classic; the grand restoration beautifully remasters, revitalises and adorns the timeless craft of Hardy and Shaffer. The Wicker Man has aged impeccably and its deep rooted religious messages are still relevant in the 21st century..Backed by a superb soundtrack and arguably Christopher Lee’s finest performance, The Final Cut’s release will allow for a new generation of horror aficionado to marvel at the grace of an everlasting legend.’