Spielberg builds a bridge over the murky waters of the Cold War in this riveting thriller. Based on a scarcely read chapter of America’s turbulent history of war; Spielberg shines a light on an unsung hero and the courageous virtues that form the glittering halo of the American dream. The Bridge of Spies exhales the toxic political charade and nuanced negotiations that unfold behind closed doors of a major conflict. The real cards are dealt by the honcho’s in darkened rooms to determine the fate of the dispensable foot soldiers on the ground. Amidst all the shadowy motives, a figure of righteousness emerges as the decisive factor to settle a stalemate between the Soviet Union and America. It’s a remarkable film that steers clear of propagandist nonsense as it ratchets up the tension. 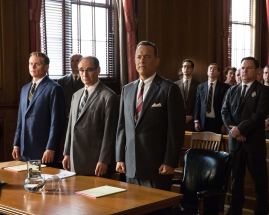 Abel, Mark Rylance). What was deemed to be a transactional trial of guilt by a corrupt judicial system and slimy CIA soon escalates into a protracted saga. Every human merits a fair and unbiased trial irrespective of crime committed. After all isn’t every human life equal? It’s a fascinating question explored through the case of the undeterred Abel.  The corruption of the state is opposed by Donovan who embodies the values of a diplomatic constitution: honesty, integrity and the courage to stand up for what he believes in. It is testament to the fact that good and honest people exist everywhere, one brush can’t be used to paint all with the same colour. The contrast is a tantalising juxtaposition and one that paints an accurate reflection of society. As Edmund Burke said ‘The only thing necessary for the triumph of evil is for good men to do nothing.’ In this instance, the actions of one man changed the fate of many. 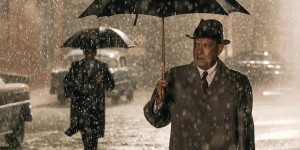 When Americans’ unwillingly get captured by the Soviet Union, they inadvertently become pawns in a tussle of power and it soon becomes clear that a rule for one is not for all. With countries at a stalemate, Donovan is thrust into a position of immense responsibility to negotiate an exchange of spies and is forced ‘to have the conversations our governments can’t’. A series of thought provoking and dangerous encounters in the frozen panic of Berlin make for terrific cinema. Donovan is in his element with strategic foresight and expert negotiation skills. He thrives on being able to make an impact and follow his instinctive hunches. Throughout it all, the corrosive role of the CIA is highlighted as a stark contrast of values. It’s a fascinating insight into espial and all its rigours.

The master craftsmanship on display from the timeless talent of Tom Hanks and superb Mark Rylance will ensure the film levitates upon a golden cloud of Academy nominations come awards season and rightly so. Hanks is the walking embodiment of the American dream and is perfectly cast while Rylance’s turn is brilliantly understated. Matt Charman and the Coen’s witty script is bought to life by Spielberg with great imagination. The story of the standing man is a touching tribute to the power of loyalty and how an ordinary man is capable of extraordinary things. Next time you become worried about something and are overcome with anxiety, don’t forget to ask yourself the most telling question: will it help?

I do not own copyright to any of the images above