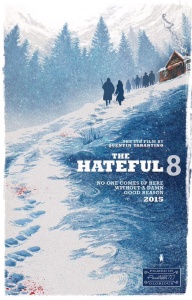 Written and Directed by Quentin Tarantino

Tarantino’s slow burning ensemble Western teeters on the edge of violence and stares perilously into a coffee pot of anarchy. It’s an immersive, out of body experience that places us in a lounging chair alongside the hateful eight in Minnie’s Haberdashery. There’s a brooding, almost tantalising hysteria of calmness that carries a promise of violence. It’s a freezing cauldron of deception, self- interest and ulterior motive that threatens to glaze over at any given moment. You can almost hear the knives being sharpened as night draws closer and the plot thickens. Once the proverbial switch is finally flipped; it’s a hell for leather, all guns blazing Tarantino-fest. The final hour is work of an insane genius. On one hand, a gruesomely entertaining Western horror but on the other, an intricately woven thriller that flabbergasts with its intellectual simplicity.

It has all the makings of a quintessential horror film. The desolate cabin takes shape of Minnie’s Haberdashery; the woods are replaced by a ravaging ice blizzard. As mother-nature unleashes havoc, a group of disbanded strangers seem to converge. Sheer coincidence or is there venom lurking beneath the mystique? In a hilarious gag, each member of the eight stagger in to the warm confines of the cabin and are forced to nail shut the door behind them to keep out the raging storm. The danger, of course, lurks within. Each nefarious character emits an aura of uncertainty; origins and anecdotes are clouded with mystery. Without a clear hero or villain to side with; there is an unpredictable edge to The Hateful eight that is deeply unsettling. Walton Goggins is fantastic as the hilarious redneck Sheriff of Red Rock, Jackson continues to defy expectations and Jennifer Jason Leigh’s monologue alone warrants her Academy nomination.

The decision to shoot in 70mm is a masterstroke allows for a series of intimate close-ups that capture that agonizing glance or pain-stricken look in the eye. The taut thriller twists and turns always hinting that it has an ace up its sleeve. It has the hallmarks of a Tarantino film: ultra-violence and dark comedy backed by Ennio Marracone’s sublime original score.

For all its brilliance, the slow-burn build does test the patience. Tarantino arranges his chess pieces meticulously until they find their resting place. Each move, every turn of phrase is clearly agonised over and sometimes overwritten. The Hateful Eight is a behemoth that stomps around in the freezing wilderness; it could certainly afford to shed a few pounds during its bloated opening third.

Tarantino has chosen to focus on the darker recesses of human history in the form of Nazi occupation in Inglorious Basterds and the slave trade in Django Unchained. For all his focus on injustice and exploitation, one could argue that The Hateful Eight is Tarantino’s first truly political work. It’s a boiler room thriller that brings together the ethnic minorities, the corrupt police, petty criminals, the old timer and even a submissive woman in handcuffs. A microcosm of the inability of Modern American society to co-exist? Or merely a coincidence? Either interpretation holds merit but one thing is for sure; the colour of Major Marquis Warren’s skin is a topic of ridicule. It’s a function of the period in which the film is set (soon after the American Civil War) but it’s a theme that is getting a little tiresome. A subliminal jab at the systemic racism in America, perhaps. But a major cultural icon like Tarantino has the power to shift perceptions, overcome prejudice and be more progressive in his characterization. It’s fascinating to see what he’ll conjure up next.