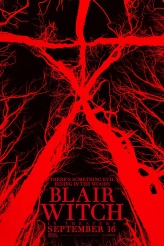 A cultural milestone and a startling resurrection 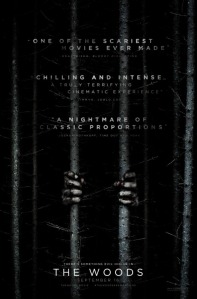 with $22,500 scraped together from family and friends went on to gross a staggering $248M worldwide after being picked up for a $1M at Sundance film festival back in 1999. The Blair Witch Project was a cultural juggernaut that essentially carved out a new sub-genre. The grainy imagery, raw editing and unscripted feel made the original instantly terrifying. A home movie that you somehow shouldn’t have been watching. Its daringly ambiguous edge and mysterious quality laughed in the face of the ‘show and tell’ that has since become synonymous with the found-footage genre. Myrick and Sanchez recognised that ‘real’ events were often seen as the most terrifying.

Adam Wingard’s working film title ‘The Woods’ already had the pulses racing with anticipation. But when the sensational revelation was made at Comic Con that it was, in fact, the official Blair Witch sequel; it was the most exciting announcement in years. A superb marketing stunt shrouded in mystery. A positive early sign but one that also reflected the significant budget behind this new edition. While Myrick and Sanchez were able to fly under the radar, Wingard and Barrett have surely been mobbed by fandom: ‘Is it a remake or a reboot? Or even a prequel?  Will you show the witch this time?’ All questions needing the right answers.

The curse of the poisoned chalice

The expectations are driven by the sheer equity the first holds plus a new generation that has been hit on the head repeatedly by each of the fifty paranormal activity sequels over the past 15 years. By now we’ve watched all the ‘found’ footage, seen the camera roll and have become digitally drunk on content. We each hold a camera in our pockets so the idea of ‘finding footage’ doesn’t quite hold the same allure as back in 1999. After the disastrous misfire of the little seen ‘Blair Witch: Book of Shadows’; a new vision helmed by a trusted pair of hands was exciting to say the least. An opportunity to right a few wrongs but also a poisoned chalice for the dynamic duo. Steer too far away from the original by adding new dimensions and you’ll be labelled a fraud who’s chopping up a cultural centerpiece, a hoodlum who ruined a ‘classic’. But repeat the brilliance of the first and you’ll be labelled as a dim-witted cowboy simply in it for the cash, copying and pasting the formula written up by Sanchez and Myrick to the ding of the cash register.

The pair have produced a solid if unspectacular sequel. The Blair Witch keeps true to the spirit of the project, a sincere homage underpins the unsettling descent into the Black Hills forest seventeen years on from the original disappearances. After finding a video seemingly featuring his vanished sister Heather, James and a group of friends head deep into the forest intent on finding her. Relying on the help of a pair of cryptic loners who found the video to help track down her origins, a tantalising yet familiar plot ensues. Confusion reigns as bearings are lost, events repeat themselves, technology goes haywire and those creepy symbols begin reappearing. There’s a strong sense of déjà vu, we’ve been and experienced this before even if it has a more modern and visceral feel. Now it doesn’t tread entirely new ground but it’s not without its fair share of scares.

There is a twenty-minute period in The Blair Witch which is genuinely unsettling. Not for the same reason as the original but for the complete opposite. While the 99 version firmly held ‘Jack’ well and truly shut inside his box, Wingard has unleashed him. The house sequence is shot with a feral intensity. The visceral nature of the Blair Witch makes the skin crawl and the heart pound particularly in the superb underground tunnel set piece. There is much to admire and ponder over the lasting impact of this sequel. Such is its significance. Does this mean a new wave and re-invigoration of the sub-genre? A definitive no but what it does do is reinforce the power of the original. Almost two decades have gone by and the blueprint remains undeniably effective.