“If you could see your whole life laid out in front of you, would you change things?’

Dennis Villeneuve’s epic yet beautifully intimate sci-fi drama reaches into the depths and turns the screw. Not since Steve McQueen’s harrowing and redemptive 12 Years a Slave has a piece of cinema rattled me so thoroughly. Arrival has theatrical magic that you can’t quite place but is becoming a common marching ground for the Canadian director. Villeneuve’s filmography to date possesses some of that elusive quality with the skin-crawling effect of doppelganger thriller Enemy, the shattering Incendies, the tough-as-nails mystery of Prisoners and the haunting final frame of Sicario. He’s a director who casts a different perspective on common themes. As with the downright brilliant sci-fi soliloquy Midnight Special and the surprising 10 Cloverfield Lane; this is somewhat of a mainstream resurgence for the genre this year. And that is an understatement.

Based on the short story ‘The story of life’ by Ted Chiang; this remarkably poignant and timely film merges the poetic wonder of life with the unanswerable quandary of mankind. A low key arrival of extra-terrestrial vessels around the globe creates mass panic. As the world watches on, a team of experts around the world seek to unravel the puzzle and uncover the aliens’ purpose on earth. Linguistic professor, Louise Banks (the terrific Amy Adams), is helicoptered in to partner the US military and other leading experts to translate and communicate. There’s a staggering attention to detail given to the alien syntax, a visual language created from scratch for the film that Banks must decode whilst under pressure to get to the heart of their purpose on Earth.

While efforts are made to understand a foreign threat, there’s a rich and elegantly fleeting portrayal of Banks’s life with her daughter. The moving montage of life moments is increasingly insightful as political tension builds and the climax nears. The deeply human quality to these fragments are overwhelmingly poignant. Perhaps even more so if you’ve recently become a parent for the first time. The entirety of life is captured in a series of vignettes which blend together to form a stream of consciousness that flows beneath the garden of other-worldliness. It’s a miraculous achievement to intersperse these emotional thunderbolts in amongst the ‘first contact’ set pieces; this breathes new life into a common framework and feels like its breaking new ground. 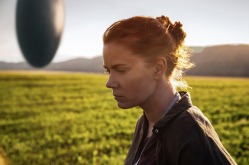 Banks forms an unlikely union with physicist, Ian Donnelly (Jeremy Renner) and gets the backing of senior officer Colonel Webber (Forest Whitaker) to approach the aliens with compassion rather than force. The fear of the unknown and desire to protect is deafening with the voice of the institution ‘we have to consider the idea that our visitors are prodding us to fight among ourselves until only one faction prevails’. As each country initially rallies in a common struggle, partitions soon become evident as nothing is learnt from the history books. There’s a painful allegory in here somewhere looking at how we have developed as social creatures and fuelled our destructive tendencies. Heisserer’s script, however, refreshingly goes against the grain and injects a vital optimism into Arrival that caught me off guard.

Nolan’s ground-breaking Insterstellar is no doubt a distant blood relative. The notion of time and our relationship with the past, present and future unite them. Banks questions: ‘If you could see your whole life laid out in front of you, would you change things?’ Now that’s an eternal question that will swing to and fro in the mind like Galileo’s pendulum for all of eternity. Bind that to the prospect of an intelligent alien life-form arriving on Earth then we are surely walking among giants? Arrival is a beaming masterpiece.

n.b. I do not own any of the copyright of the photos above