HMZ Film screams into a magazine near you!

Earlier this year I was pleased to announce that I joined the Scream Magazine team!

Four HMZ Film articles have been published in the latest issue of Scream Magazine (Issue 23) which is out now in HMV stores nationwide across the UK.

Here is a quick summary of what you can expect to see if you pick up a copy:

George A. Romero: I interviewed the legendary horror film-maker to discuss his unequivocally brilliant contribution to the genre, the creation of the ‘zombie’, seminal films such as Night of the Living Dead and Dawn of Dead amongst other things. Comic fans will enjoy George talking about his new vampire/zombie project whilst many will agree with Romero’s scathing verdict on the current state of horror.

Dario Argento: My interview with the Italian auteur saw us discuss Argento’s surrealistic brand of film-making, the intersection of violence and art, the Mother of Tears trilogy (including Suspiria) and Argento’s uneasy feelings towards remaking his classic films. 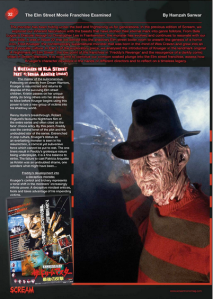 Nightmare on Elm Street franchise examined (Part 2): In Issue 22, my debut analysis explored the conception of Fred Krueger and charted the iconic villain’s growth in the first three Elm street films. Here, I continue my plunge into Krueger’s shadowy boiler room to dissect the remaining entries in the franchise. I reflect on Krueger’s legacy as a metaphysical phenomenon and his lofty position in the monster hall fame.

A day on set Ibiza Undead and Interview with director Andy Edwards: I visited the set of upcoming zombie comedy Ibiza Undead for a day of filming with Alex Zane and the rest of the amazing cast including Cara Theobold (Downton Abbey). My interview with director Edwards discussed the film’s origins, the Cornetto trilogy, the influence of George A. Romero and much more.

Here are the links you need to follow the latest news from Scream including how to subscribe to the magazine:

Thanks for the support and happy reading!